The inscription within the window reads:

The inscription at the foot of the window reads

“This window was given by William Simons in memory of the members of the Simons family who lived in this Parish & are buried in the church yard”.

The window was designed by Mr V. J. F. Farrar, Architect of Bedford, and it was dedicated on 27th July 1966. The Rev. Kemmis, Vicar of Renhold, conducted the service and dedication and the unveiling was performed by the Rev. J. R. Douglas-Jones, Vicar of Fulwood, near Sheffield. It replaced a 15th Century window.

The window depicts a man working with a scythe in a field of wheat.  There are also the symbols of the means of Grace – a bible, bread and the cup.

William was late of Little Birchfields Farm, Great Barford, Bedfordshire and the window was in memory of his family who formerly lived in Renhold at Blunham Lodge, a thatched Georgian Gatehouse at the entrance to Howbury Hall, demolished in the 1970’s; this property was one of two lodges to Howbury Hall.  William’s family was employed in Howbury Hall as footman, butler and head gardener around 1900.  When the family had saved enough money they rented Little Birchfields Farm of about 100 acres. 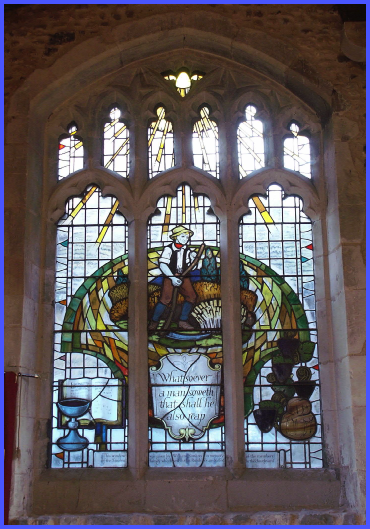